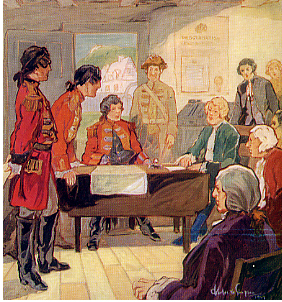 1763 – 1786: Governors of the Province of Quebec – England
Claude Bélanger,
Department of History,
Marianopolis College
(The Constitution is here treated jointly with the Instructions sent to James Murray; these instructions are important to understand the intent of the British Government)
The Royal Proclamation was the first constitution granted to Quebec by the British Government following the Treaty of Paris of 1763. The Proclamation, issued on October 7, 1763, gave Quebec its first civil government since the Conquest of 1760.
The constitution defined the new territory of the colony – essentially the St. Lawrence Valley, and named it Province of Quebec. The inhabitants of the province were forbidden from entering the western territories without first obtaining a permit to be issued sparingly by the Governor. French civil and criminal laws were abolished and the Test Oath, established in the British Empire to prevent Roman Catholics from participating in the government, was introduced. Government was to consist of a Governor assisted by a Council; as soon as circumstances would be favorable, the Governor was to call for the formation of an  elected Assembly that would be empowered to make laws and levy taxes.

Governor Murray with his Council in 1764
(Artist Charles W. Simpson)

In issuing this constitution, the objectives of the British Government were complex:
The Royal Proclamation, by abolishing French civil laws, put the seigneurial system in jeopardy and eliminated the legal requirement to pay the tithe to the Roman Catholic Church; as a consequence, two important social institutions of Quebec were threatened. The introduction of a legal system foreign to the people of Quebec constituted a major attack on their culture, as legal systems inevitably reflect a vision of the world peculiar to the culture that have created them. The reduction of the territory to the St. Lawrence Valley also showed a lack of understanding of local conditions as the economy rested on the fur trade which required a large territory to operate efficiently,  and the control of the Great Lakes’-St. Lawrence system was essential to its proper functioning. The introduction of the test oath, and the resulting exclusion of the Canadiens from all positions connected to the government of the colony, rendered efficient government impossible as the Canadiens remained the vast majority of the population for decades.
Essentially, what was wrong with the Royal Proclamation was that it was designed for a ‘British’ colony when in fact it was, and was to remain, one peopled by the Canadiens. British immigrants did not come into the colony until the Loyalists were to escape the American Revolution and the Canadiens did not assimilate, entering instead in a phase that historian Michel Brunet called: ‘passive resistance’. The British governors sent to Quebec (James Murray and Guy Carleton) understood rapidly that the constitution did not make much sense in the context of Quebec as it did not fulfill the conditions necessary for the success of a constitution in Quebec, refused to apply parts of it (for example, the Assembly was never called, much to the displeasure of the British merchants who had come to Quebec) and urged the British Government to make changes, especially as trouble in the American colonies made British power more and more tenuous and uncertain on this continent. Ultimately, the constitution was a failure because it failed to properly take into account the distinctiveness of Quebec. This mistake was corrected by the Quebec Act.

1982: Constitution Act includes Charter of Rights and Freedoms, an act created by the UK Parliament on behalf of the Queen of England